What Do Vein Systems Do?

Veins move nutrient-poor blood back to the heart to be rejuvenated. Your body has two vein systems that run parallel to each other:

The great saphenous vein is a long, superficial vein that runs from the inside of the foot and ends near the groin, where it connects with the deep vein system. It's the most commonly treated vein for symptoms of venous disease.

The small saphenous vein is another superficial vein that runs from the outside of the foot up the back of the calf. It ends at the knee, where it connects with the deep vein system. This vein is the second most common vein to be treated for symptoms of venous disease.

Deep veins run underneath muscle tissue and are the workhorse of the venous system. In the leg, deep veins carry 90 percent of the blood out of the legs and back toward the heart. Major deep veins include the femoral vein and popliteal vein.

Blood is moved between these two types of veins through perforating veins, which act like bridges to ensure that enough blood is channeled into the deep veins rather than staying closer to the superficial veins on the body's surface.

What is Venous Disease?

Venous disease is the result of faulty valves in the veins and is sometimes called venous insufficiency. 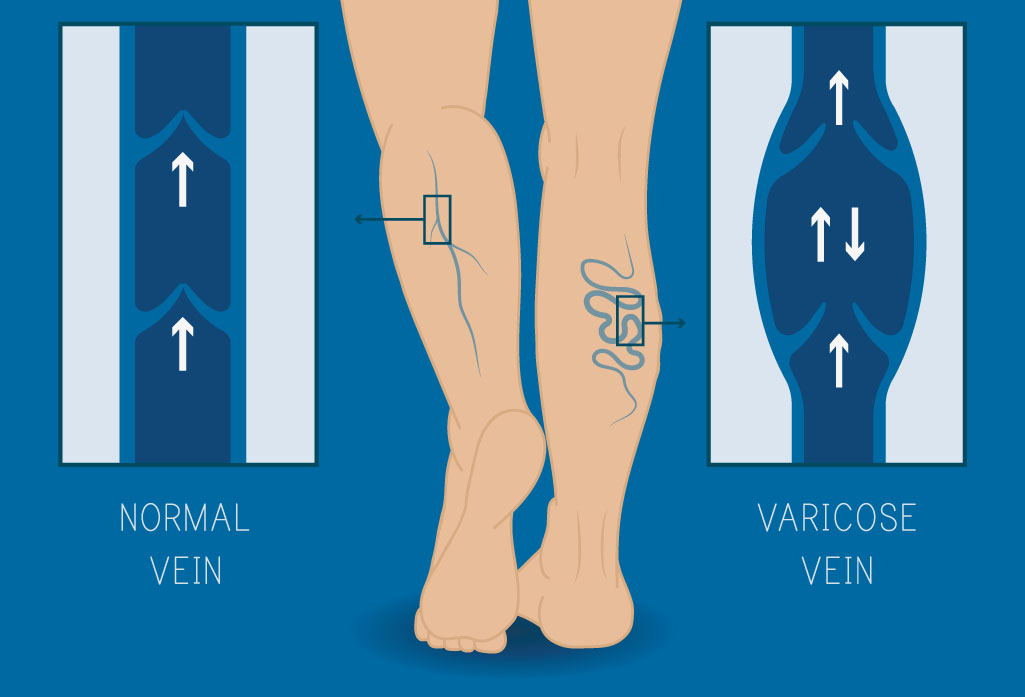 In a healthy vein, one-way valves allow the blood to move toward the heart, but not away; arteries move blood away from the heart, moving nutrient-rich blood throughout your body, and veins return the nutrient-depleted blood to the heart to be re-infused with oxygen and other essential elements before being pumped back out to the body again by the arteries.

As such, arteries are muscular vessels that pump blood all the way into the extremities. Veins are not as muscular and instead rely on calf muscles in the leg to help them push blood up to the heart, against gravity. When the calf muscle contracts, it squeezes vein valves open so blood can flow upwards. The valves then close when the muscle relaxes to prevent blood from flowing back toward the feet. Dilation of the vein wall prevents the vein valves from sealing completely.

In a diseased vein, these valves do not work properly, allowing the blood to fall downward in between heartbeats. This back-and-forth motion of blood leads to an increased venous blood pressure, resulting in swelling and eventually inflammation of the tissues around the vein. Left untreated, this condition only worsens over time.

Heredity is the No. 1 risk factor for venous disease. If your parents had varicose veins, you have an 89 percent chance of developing them.

Next to heredity is gender. Women, especially those who have had multiple pregnancies, are three times more likely than men to develop venous disorders.

Age also is a risk factor. While older people are at a higher risk for venous disease, it can start as early as childhood.

Trauma from an accident or from a medical procedure that damages the vein may contribute to vein and circulation problems, and obesity can be a factor, although not a primary risk. Professions that require long periods of sitting or standing also increase the risk for venous disease.