FHN » About Us » In Their Own Words » Linda Werntz

In Her Own Words


ER Is a Lifesaver for Werntz Family

“Her life was saved three times in nine hours" 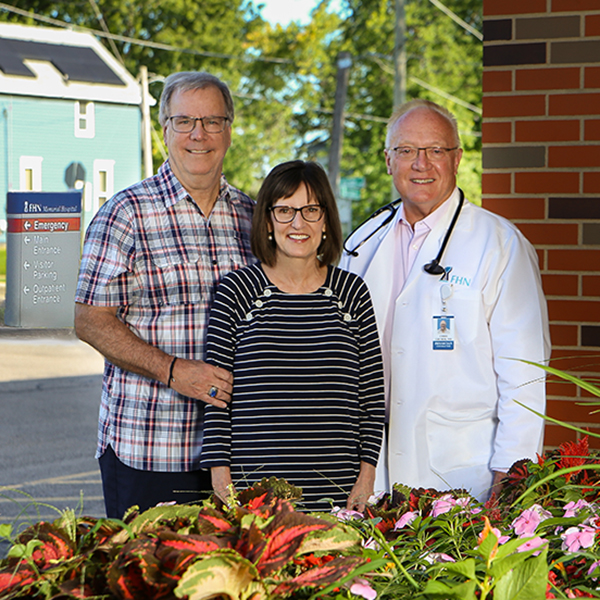 ER Physician Chris Gruber, MD, poses with the Werntzes just outside FHN’s ER, where he helped stabilize Linda Werntz after an aneurysm and advocated for her subsequent care.

Don, a local radio personality and sportscaster with Big Radio, credits Star Ambulance for the “first save” – keeping Linda alive at their home in Freeport. “I was working in my home office recording shows and for some reason I felt the need to go downstairs. I heard moaning in the basement and I quickly knew something was wrong. Linda could not communicate well, had a terrible headache, and had thrown up.

When I realized she would not make it to the car for a trip to the ER, I called Star Ambulance. In that short time – less than five minutes until the ambulance arrived – her body stiffened and her condition was clearly deteriorating. When I saw Tom Kempel, the EMT, doing CPR, I couldn’t believe what was happening.”

Linda was transported to the ER at FHN Memorial Hospital, where a CT scan identified her critical condition. According to Don, “Dr. (Chris) Gruber* met with me to explain the severity of the situation. I was told this type of aneurism is often fatal. In fact, 90 percent of people who experience this type of bleed don’t make it or have significant deficits.”

As Don processed Linda’s ominous outlook, Dr. Gruber was taking action to get her transferred to a center of excellence for brain trauma. “I didn’t know this at the time,” explains Don, “but he saw the need to change the typical rotation usually used to transfer patients and insisted she be moved to OSF St. Anthony in Rockford, which is widely seen as a leading regional center for head injury. In my opinion, and according to our neurosurgeon in Rockford, that was Linda’s second save.”

Don is full of praise and appreciation for Dr. Gruber. “He was professional and calm while exuding strength and a sense of command. I needed that at a time when I felt very vulnerable. His competence helped me keep it together and gave me resolve to take this one step at a time. He was just the right combination of smart, experienced, and compassionate.”

Linda had several brain surgeries in Rockford in the following days, which stopped her brain from bleeding. Since then, she has had subsequent admissions to FHN, UW Madison, and Van Matre Rehabilitation. She has been fighting to regain her strength and good health for more than two years now, but continues to make progress.

“She is a miracle, and I am so grateful to all the healthcare professionals who saved her life,” says Don, “and to our sons for their support. Ryan is a physician in Florida, so he was well-equipped to ask the right questions via FaceTime and help me make medical decisions. Our younger son, Adam, had the flexibility to move his work office from Chicago to our house in Freeport, so he provided tremendous support on the home front. This experience has reminded us all how fragile life is, and how much we appreciate our family and our community’s healthcare capabilities.”

Linda is grateful too. “Thank God FHN’s ER was close by and equipped to help us through a very dangerous healthcare crisis,” she says. “I am sure thankful for all the people who helped pull me through, with Don being number one on the list. He saved the day. What if he hadn’t come downstairs when he did?” she surmises. “He is my hero – my knight in shining armor – my constant support. I don’t know what I would do without him.”

*This provider is not an employee or agent of FHN. 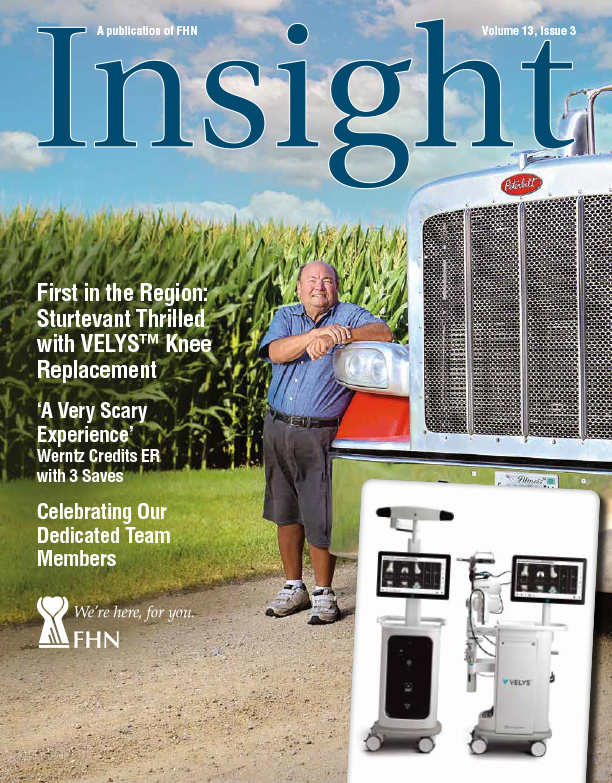